The robots are coming! Your career in the age of automation 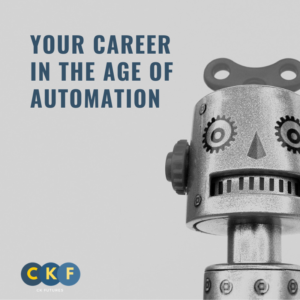 Automation is here and apocalyptic stories of career doom are hard to ignore but do we really need to rethink our careers today and plan for the arrival of technological advances that will essentially make us redundant?

No one can doubt that the change of pace in modern life is rapid and that this change is already being felt keenly in the workplace. This was perhaps best highlighted in the recent budget when Chancellor Philip Hammond warned that a million British workers would need to retrain following his commitment to ensure that driverless cars will be on the road by 2021.

So potentially big changes in the workplace if you’re an HGV driver or you drive a taxi for Uber, but where else will we see changes as a result of automation?

In a relatively short period of time I myself have seen some considerable changes within HR and recruitment. ATS or the ‘Robots’ as I like to think of them, are already now a regular feature of the recruitment process – providing recruiters with an automated process that screens applicants CVs in a fraction of the time it would take a human being.

In the U.K., the Bank of England suggests that about half the country’s total jobs, primarily in the services sectors (about 15 million jobs) could be lost as a direct result of automation thus widening the gap between rich and poor.

“The pace of change will be so rapid that people will learn ‘in the moment’ using new technologies such as augmented reality and virtual reality. The ability to gain new knowledge will be more valuable than the knowledge itself,” Dell Technologies said in a statement.

The nature of work is surely set to change and we can already see that with the ever-increasing presence of the ‘gig economy’. In an extension of today’s gig economy, companies will set out tasks to be completed, then use information technology to match the task with the people and technology that have the necessary skills, anywhere in the world.

The career winner and losers of automation

Alarming times indeed but whose jobs are safe and whose are potentially under threat?

The careers more susceptible to automation are physical ones in highly structured and predictable environments such as manufacturing and food service, as well as data collection and processing.

A 2013 study by Oxford University called The Future of Employment also found that some jobs – telemarketers, tax preparers and sports referees – are at more risk than others including recreational psychologists, dentists and physicians.

Indeed’s EMEA economist Mariano Mamertino suggests that the occupations which will be harder to automate “often involve managing and developing people” and “decision-making and strategic planning, or creative work.” He suggests that careers that combine creativity and manual skills (such as a chef) are safe and that those working in professions such as healthcare, education, training and creative communication require skillsets that are well beyond the abilities of robots.

How to prepare for your future career

A recent study showed that ‘millennials’ already choose professions that are more “future-proof,” and less likely to be taken over by machines, but future proofing even for that ideal future career may not be as easy as we’d like it to be. According to a recent report authored by the Institute for the Future (IFTF) states that 85 per cent of the jobs that will exist in 2030 haven’t even been invented yet. So how do you plan for a job that doesn’t exist?

Not only that, but the idea that for many of us, the ‘job for life’ employment model might still exist is also unlikely. What seems more likely is that many of us affected by automation will need to think more broadly about how our career paths can flex and incorporate the changing technological landscape.

Justin Tobin, founder of the innovation consultancy DDG, has indicated that career resilience is all about career diversity. Using the analogy of the stock market he suggests that much like betting on the stock exchange we should be ensuring we have a diverse portfolio of skills and experiences.

Faith Popcorn, a futurist, echoes the idea and suggests that in the future, we’ll all work multiple jobs, with the average adult working for a number of companies simultaneously rather than working for one big corporation.

“We’re in the midst of this huge sweeping change that is going to impact all levels of society,”

With the ever-increasing presence of the gig economy and more and more professionals already turning to multiple roles, this seems more and more likely.

The risks to workers from automation are clear, but there are also definite opportunities. This will lie in people maximising the value of their human skills. Young people entering the jobs market in the next ten years are less likely to struggle with adapting to this type of employment.

It is those of us already well along our career paths that need to be prepared for change and to work out how best to build greater resilience into our careers by building in even greater diversity of skills and experiences.